More than a Virtual Assistant - A Time Management Expert

I’m not a Virtual Assistant, I’m a Time Manager! 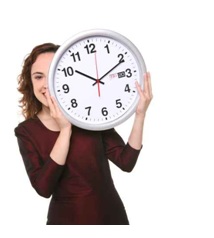 Everyone has his strengths, and one of mine happens to be time management. OK, my husband calls it OCD, but I call it being focused, prompt and responsible. I was paired with my Boston-based legal client because while his strength is writing compelling briefs, he is (ahem) anything but organized or timely. He is easily distracted. Never flustered, but he’s a bit like a puppy, exhibiting intense focus on any given topic for about 13 seconds before he refocuses on something else entirely unrelated, and most likely not on his to-do list. To his credit, he recognizes his weakness in time management and “called for backup” about a year ago.  Here I am – the Backup.  I feel like I’m on Miami Vice.

While I do tend to all of his administrative responsibilities, including:

I actually fancy myself as his Time Manager, rather than his Online Virtual Assistant. This is because while I do manage his administrative tasks, ultimately, it is my top responsibility to make sure he stays on topic and focused on the things that are imperative to be completed THAT DAY. A professional nag? Perhaps, but an effective one. It’s as if an overeater recognizes his tendencies and reaches out for a sponsor or a support group so someone can be on the lookout for packages of missing ding-dongs. He realizes that he has a focus problem, but cannot give attention to it within the day-to-day hubbub, so that’s my responsibility as his “Time Sponsor.”  (I have given myself about a thousand amusing titles.)

My client had attempted to stick with other methods in the past – well intentioned family members and colleagues had spent the last 10+ Christmases giving him books like Getting Things Done and The Skinny on Time Management to no avail. Ultimately, it has taken a true partner (me) who believes in him (and I do!) and encourages him to stay on topic and submit his briefs on time. Yes, that means that I email and call him about 6 times/day. Yes, he gets annoyed sometimes. I continue to stalk him, that’s my job.

My method of coaching and guiding has been simple. Initially, I studied his habits and tracked his daily activities to find out why so much time was being wasted. It seems that he has a proclivity for fantasy football leagues. (Fair enough, my time waster of choice is Pinterest, but at least I recognize it and allow myself specific windows of time to dedicate to it.) I drew up a schedule for him and now he can “play” with his fantasy football picks at specified periods as a reward for productive time.

Second, I am in charge of his schedule – completely. I am ruthless when it comes to making sure he is heavily scheduled. I book him back-to-back “meetings” so his day is planned out the second he sits down at 8 am and there is, therefore, very little time or mental space for conjecture. These “meetings” are not over lunch or coffee, and they are often not with anyone at all. I simply plan out what he needs to accomplish, and since I’ve learned enough about his business to know how long research, depositions, travel time, writing and compilation should take him, everything is spelled out hour by hour on his calendar. He just needs to follow directions, rather than plan – and for him, that’s exceedingly lower stress than deciding or prioritizing.

Because I set hard time limits for tasks and have a ‘tough love’ approach with him (hey, he asked for it!) he is entirely more successful in submitting his client work on time. A year ago, he had a destructive habit of losing clients from time to time due to his all-over-the-place-ness. I can triumphantly report that this has not happened since the commencement of our relationship. I would totally put “Professional Nag” on my LinkedIn profile, but I have a feeling no one is searching for that.