Keeping Your Gmail Inbox Super-Organized with the Gmail Star System 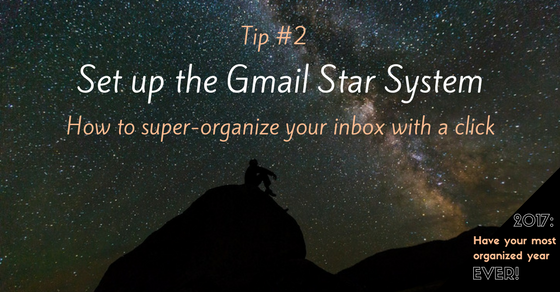 Gmail has great features to help you keep your emails organized and stay on top of important emails. The Gmail Star System with Quick Links is a super helpful system we’ve developed here at Virtual Assistant Israel to keep track of emails that you haven’t responded to yet or need to follow up with. We’d love to share it with you.

For those of you who are “video-learners,” these two short tutorials show you how to get the Star System up and running in a few minutes. If you prefer written instructions with screenshots, you’ll find that below.

When using Gmail as is, you’ll notice emails have a little star that you can click to make yellow to “flag” emails. 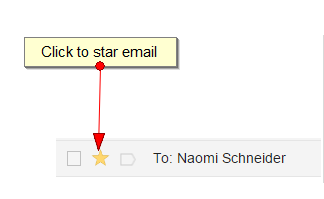 Using stars, you can easily indicate which messages as important or which ones you need to reply to later. On the side bar, you can click on “Starred” to show only those emails you have starred. 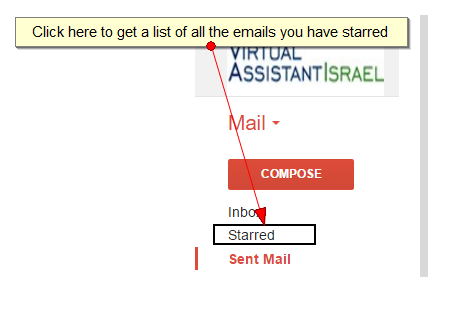 You can add more color stars to make the star system even better! In the Settings option under the General tab, just scroll down until you see Stars, and drag the stars not in use to in use.

To star an email, just click on the star like you would to turn it yellow, but then click again until you see it turn the color you want to use.

Now that your emails are categorized with the stars, how do you quickly bring up all the emails of one star color?

The Starred option on the sidebar will bring up all your starred emails. But let’s say you just want to see all the emails of one particular color. To bring up the color you want, you need to go into the search screen and type in the appropriate search phrase. For example, if I want to see just my red starred emails, I type in:inbox has:red-star. (The search phrase for every color star is in a handy list below.)

That will bring up my list of emails that are starred red.

That long search phrase is kind of inconvenient to remember (or search for every time you need it!). Here’s the trick to getting to all your red stars (or any other color) with one click, right in your inbox.

The key is Quick Links. (If you don’t yet know how to use Quick Links, check out our last tip – with its 1 minute tutorial video. It’s one of those “I can’t believe I didn’t know about this feature!” tips.)

Once you have Quick Links set up, do your initial search for red stars with the search phrase above. Then press Add Quick Link in the sidebar, give it a name and you can easily get to them whenever you need to!

Now, every time I want to view the emails I starred red, I just press “Red Stars” and only those emails are listed.

Keeping your emails organized is super fun and easy with the help of the Star System and Quick Links.

FYI: As far as I’m aware (but would love to be proved wrong), these features are not available on mobile devices. Stars can only be viewed as yellow using an iPhone.

Please note: If you want to search only for stars in your inbox add “in:inbox” before the word “has” when searching.